Back to all News + Events

David Dickerson sits down at the table for a quick bite for lunch before heading back out to the fields. His heifers are in the middle of calving, and his ranch, nestled in the hills outside of Paradise, Kan., is bearing the brunt of one the longest cold snaps in decades. Longer hours spent outside in the biting windchills; putting out hay, breaking ice and other added chores just to care for the herd and their livelihoods. It will be another mark in history for this fifth-generation Bar S Ranch – the February 2021 battle with Mother Nature – stories sure to be passed on to the next generation.

David and his wife, Stephanie, and their three sons Grady, Ethan and Jayce, along with Stephanie’s parents, Ken and Pat Stielow, are a seed-stock operation raising Angus, Red Angus and Charolais genetics. The family hosts an annual bull sale the second weekend in March, selling close to 150 balanced-trait bulls and 150 commercial females every year.

“We’re a seed-stock operation, so we have to calve a little earlier because of the bull sale,” David said. That means also focusing on winter bull management, such as proper nutrition to maintain body weight and offering protection from the cold to assure fertility. When winter is full on, the Dickerson’s feed about 30 to 40 bales a day to meet their herd’s nutritional needs.

It’s no secret to producers that nutrition represents the largest input cost associated with raising cattle.

“Anytime you feed anything, it’s an input cost and we all strive to be low-input producers,” David added. “We used to feed everything with a bale bed but have since transitioned to feeding with a processor to stretch our hay and hay-buying dollar.” David estimates that change alone has decreased his hay usage by 30 percent. 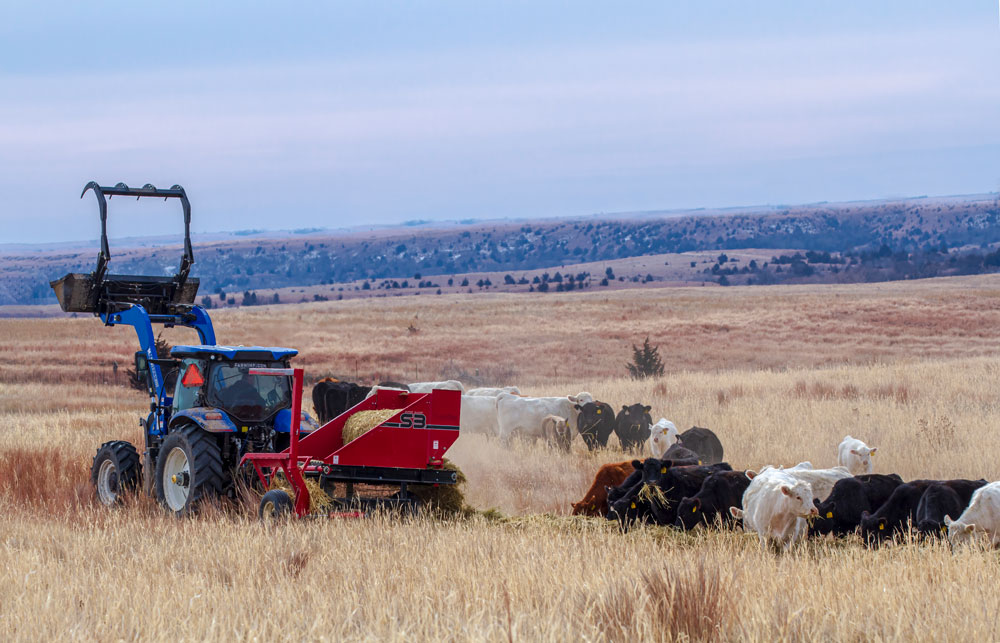 S3 by DewEze slices and unrolls bales back into the same narrow windrow that it went up in for less waste while feeding.
(click to enlarge)

Last fall, Bar S Ranch added an S3 Super Slicer to their operation to be able to minimize waste when feeding alfalfa, oats and millet hay.

“The DewEze S3 machine doesn’t seem to beat up your high-quality forages as much,” David said. “There’s no leaf loss, little dust, and it slices and unrolls it back into the same narrow windrow that it went up in.” Producers never want to feed any more than necessary, David acknowledged, and he said the S3 gives them the flexibility to be able to feed a partial bale to a smaller group of cattle.

Other S3 features that increase efficiencies on their ranch, David said, are the lower-horsepower requirements and side-loading capability compared to traditional processors.

“It’s a very user-friendly machine and it’s worked better for us,” David ended, as he headed back out to the pasture to break up a six-inch layer of ice once again.

The Bar S Ranch Annual Bull Production and Female Sale will be held Saturday, March 13 at 12:30 p.m., on their ranch north of Russell.