Back to all Customer Highlights

GRASS RANGE, Mont. - Like branches on a tree, the Eickhoff Ranch and Elk Creek Cattle Company grow in different directions, yet are rooted in the same tree in central Montana.

In 1911, Lyle and Wayne Eickhoff’s grandparents secured a resource for the family after purchasing a farmstead in rural Montana. There, the family laid the groundwork for agrarian generations to follow, raising cattle, sheep and chickens, as well as growing corn.

Nearly five decades later, the family moved the farming operation to Grass Range where it’s still headquartered today. The Eickhoff brothers formed Eickhoff Ranch in 1967, and took the virtue of family farming a step further at the turn of the century. Lyle and Wayne split the ranches in two after Wayne’s son returned in 1999.“We believed it would make the transition between the generations simpler,” Wayne said. 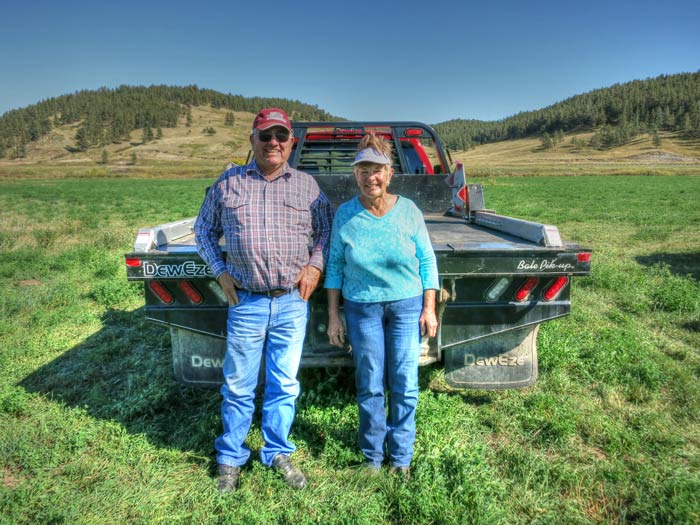 Eickhoff Ranch is owned and operated by Wanye and Ginger Eickhoff, and their son, Allyn, his wife, Tiffani, and their three children. Lyle formed the Elk Creek Cattle Company, which he owns and operates with his wife, EDee, and son, Ross.

Together, both families trek across 10,000 acres to tend to about 900 head of cattle on any given day. With the physically demanding workplace and never-ending to-do list, the Eickhoffs are constantly seeking out how to improve time management. They purchased their first DewEze® bale bed in 1987 to aid in backbreaking tasks.

"Every time I pick up two round bales with my DewEze, I think back to the days when I would have to load 40 small square bales on the back of my truck."

“It’s a lot easier and quicker to use a DewEze,” Wayne said. “Every time I pick up two round bales with my DewEze, I think back to the days when I would have to load 40 small square bales on the back of my truck."

These two ranches have purchased a total of 11 DewEze® bale beds over the years, crediting service and support from dealer, Tom Delaney.

“I am 71 years old,” Wayne said, “We have cattle in several different pastures and it allows us to feed them all in a timely manner.”

Freeing up more time to spend with family, now growing into a fifth generation.